Diversified businesses often do well, and PepsiCo (NYSE:PEP) is an obvious case that demonstrates the value of diversification in a crisis situation. Pepsi-Cola’s history dates back to the 19th century, but PepsiCo, Inc. was created from the merger of Pepsi-Cola and the Frito-Lay snack business back in 1965. For more than half a century, PepsiCo has been a major presence in grocery stores, convenience stores, and anywhere else that consumers can find snacks and beverages. Its stock has climbed over time, and PepsiCo is still seeking ways to improve its market share and offer its customers a better food and drink experience.
However, some investors worry about the recent controversy surrounding sugary soft drinks and their potential health impacts. The stock hasn’t responded negatively thus far, reflecting both the value of having the snack business under PepsiCo’s corporate umbrella and the company’s early adoption of efforts to climb onto the healthy-eating trend. For it to continue to thrive, PepsiCo will once again have to demonstrate its ability to adapt to changing times. 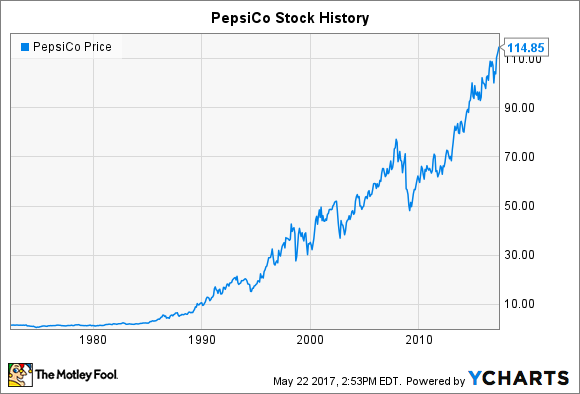 The upward track of PepsiCo stock

One thing to keep in mind about PepsiCo’s stock history is that the chart above is a bit misleading in a way that actually understates some of the company’s long-term growth. For instance, in 1996, PepsiCo began the process of spinning off its interest in the Taco Bell, Pizza Hut, and Kentucky Fried Chicken brands, creating Tricon Global Restaurants, which would eventually become Yum! Brands (NYSE:YUM). The spinoff was complete in 1997, and the distribution of Tricon shares reduced PepsiCo’s stock price — even though investors got value from the spinoff.
However, acquisitions have been a much more common occurrence for PepsiCo than spinoffs and other dispositions. Internationally, PepsiCo acquired snack food companies in the U.K. and Mexico in the late 1980s and early 1990s, and buying Tropicana juice in 1998 and Quaker Oats in 2001 helped flesh out the company’s offerings. 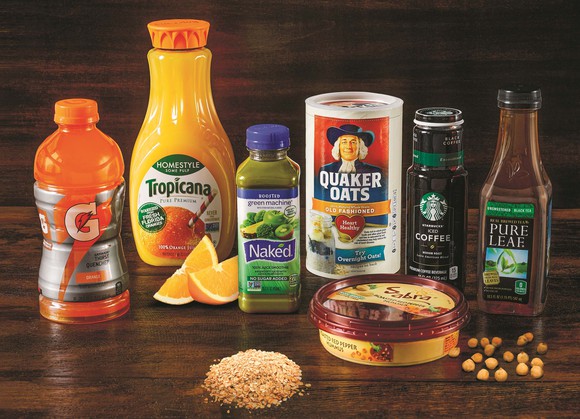 Like most stocks, PepsiCo suffered some declines over time, but its status as a consumer stalwart helped reduce any negative impact. For example, the 2000 to 2002 downturn wasn’t such a big deal for PepsiCo, largely because of the company’s Quaker merger, and in part because the stock hadn’t seen quite as huge a run-up in the 1990s as some more technologically focused companies. The year 2008 was crueler to PepsiCo, but even then, the roughly one-third decline in the stock price was relatively modest and also proved to be short-lived. By 2013, the food and beverage giant had seen its shares hit new all-time record highs, and big gains have been fairly consistent since then.
One reason for PepsiCo’s success has been its customers’ devotion to its strategic vision. Early on, CEO Indra Nooyi identified the need for PepsiCo to evolve into a more health-conscious company, and PepsiCo’s Performance with Purpose initiative recognized the need for sustainability in the way that the snack and beverage giant did business. At the same time, PepsiCo has worked hard to become a global brand, and the company’s dedication to gaining a foothold in China has been instrumental in its international success.

At this point, PepsiCo finds itself in a better position than many of its industry peers. Efforts to become as lean as possible from an operational standpoint have helped the beverage unit survive the pullback in demand for its namesake cola and its other sugary carbonated soft drinks. Diversification into tea, juice, and water products has been a smart move. At the same time, the snack unit has largely avoided the health controversy with innovations of its own. Yet by marketing the two sets of products together, PepsiCo enjoys greater bargaining power that gives it leverage with retailers.
PepsiCo stock has done well over its history, but many see the good times just beginning. With so much promise in international markets, PepsiCo has the opportunity to outpace its competition and build up market share across the globe.