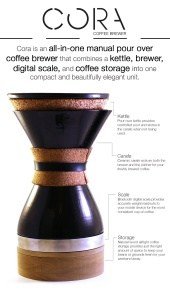 The Cora coffee brewer was approached from a designer’s perspective, meticulously refined to achieve the ultimate fit and finish your kitchen deserves. Also highly functional, Cora combines four of the most essential pieces of coffee gear in brewing the best pour-over coffee. Cora is a novel new coffee product for these reasons:

-Functionally practical – Cora save space and money for the coffee lover by combining expensive equipment into one affordable package.

Cora’s Kickstarter campaign is still in it’s early days, which means you can jump in and claim the best early bird bundle before they’re gone. It’s $99, and shipping is set for January 2017.

Cora was founded by Aaron Freyer, a coffee-aficionado and industrial design student based in San Jose. The Cora coffee brewer emerged out of his frustration with current pour-over coffee setups taking too much space while traveling. For over six months Aaron worked to design and develop a functioning prototype coffee maker that would ultimately consume less space in a suitcase than a loaf of bread.

For more information and to pre-order your Cora coffee brewer, visit: https://bitly.com/29GIGfV