(Reuters) – Coca-Cola Co () said it would replace Coke Zero with a new sugar-free drink in the United States next month, as the company sharpens its focus on low and no-sugar versions of its sodas that helped best quarterly profit estimates.

The new drink, Coca-Cola Zero Sugar, is already available in Europe, Middle East & Africa and Latin America, where it grew in double digits in the second quarter ended June 30.

The company said the look and taste of Coke Zero Sugar will be closer to the original Coca-Cola.

“It is a reinvention of Coke Zero… it is about helping the zero-calorie part of the portfolio grow,” Chief Executive James Quincey, who took over in May, said on a conference call.

Coca-Cola, like rival PepsiCo Inc (), has been stepping up efforts to reduce sugar in its beverages and building its non-carbonated drinks portfolio as consumers look for healthier options.

Volume sales of low and no-calorie soda drinks rose in the mid-single digits in the second quarter.

While Coca-Cola’s net revenue declined 16 percent in the quarter, as the company sells off its low-margin bottling operations, revenue from its core beverage business, or organic revenue, rose 3 percent, indicating strength in demand.

“Organic revenue growth in sparkling soft drinks was led by innovation in and marketing support for our low- and no-sugar options like Coca-Cola Zero Sugar,” Quincey said in a statement.

Organic revenue was also boosted by higher unit sales of its mini-cans and small bottles, which have gained in popularity even as king-sized bottles fall out of favor.

There was some concern that Coca-Cola’s organic revenue growth would be weak in the quarter, based on scanner data that showed weak beverage sales at convenience stores and PepsiCo reporting flat volume sales in North America for the quarter, JP Morgan analyst Andrea Teixeira said in a note.

Coca-Cola said demand also rose for its non-aerated drinks such as innocent juice and smoothies in Europe.

Revenue fell to $9.70 billion but beat the average analysts’ estimate of $9.65 billion.

Coca-Cola’s shares were up about 1 pct at $45.58 in afternoon trading on Wednesday.

Reporting by Sruthi Ramakrishnan in Bengaluru; Editing by Arun Koyyur 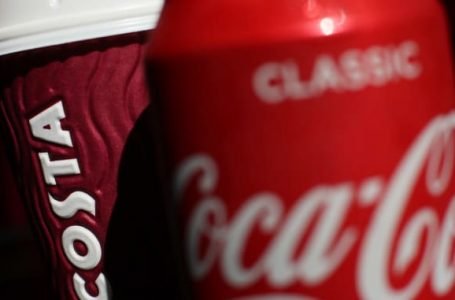