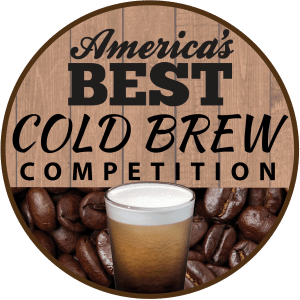 Every single day more consumers are discovering cold brew and this doesn’t appear to be a passing trend. From the largest coffee chains in America to the smallest independent specialty retailers, almost everyone is adding cold brew coffee to their menus. Now that cold brew has moved beyond fad to a mainstream permanent menu addition, Coffee Fest together with founding competition sponsors, JoeTap and Toddy are proud to announce the creation and debut of America’s Best Cold Brew Competition at the 78th Coffee Fest Trade Show which will make its first stop in the Los Angeles area at the Anaheim Convention Center September 30th through October 2nd.

To qualify for America’s Best Cold Brew Competition, competitor’s “Cold Brew” must have been manufactured with only coffee and water. The water may not be flavored and no additives may be added during the brewing or distribution process. Each competitor will choose to sample either “traditional still,” or “nitrogen infused” cold brew. Head to head matches will be judged by the Coffee Fest attendees together with a control group of industry professional judges. The industry professional control judging will be judged “blind.” In both cases, competitors cold brew samples will be judged entirely on taste preference. Similar to the America’s Best Espresso competition judging at Coffee Fest, all judges will be encouraged to consider only the aspects of palette pleasure including: flavor complexity, balance, mouth feel, body and aftertaste.

The competition will occur on the exhibition floor with eight of the 16 competitors squaring off Friday from 12:00pm to 2:00pm and the remaining going head-to-head from 2:30pm to 4:30pm. At 4:45pm on Friday, the eight competitors advancing to Saturday’s competition will be announced. The elite eight will then sample and be judged from 12:00pm until 4:00pm on Saturday with the final four being announced at 4:45pm. On Sunday, the final four will compete from 11:00am until 2:00pm and the trophy presentation will occur at 2:30pm at the competition venue.

Join us at Coffee Fest Anaheim, participate as an attendee judge and witness who is determined to have America’s Best Cold Brew. The winner will be awarded $1,500 and the Championship Trophy. Second place will take home $750 and third place will receive $250.

About Joe Tap
JoeTap is the world’s first on-demand Nitro Cold Brew Coffee distribution solution and proud to be a founding sponsor of America’s Best Cold Brew competition. JoeTap delivers either still or nitro coffee, perfectly, consistently and deliciously with each and every pour. JoeTap will be supporting any competitors that would like their assistance leading up to and on-site throughout the competitions.

About Toddy
For nearly 50 years, Toddy has delighted baristas, food critics, and regular folks alike for its smooth, delicious flavor. The Toddy Cold Brew System produces a smooth, low acid concentrate ideal for hot or iced coffee or tea. Toddy will be supporting any competitors that would like their assistance leading up to and on-site throughout the competitions.
# # #
For more information contact: Erika Lowery 425.295.3300 ext. 126. erikal@coffeefest.com