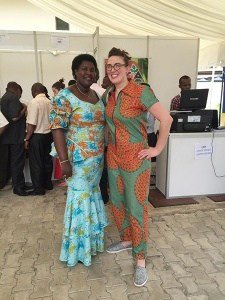 Brooklyn-based coffee roaster Café Grumpy extends its fundraising efforts for the Burundi Shamba Mushroom Project through the end of September.

Café Grumpy has joined forces with East African entrepreneuse Angèle Ciza in an effort to support economic growth and diversity in Burundi. The Brooklyn-based roasting company has been working with Ciza since 2013, buying her Shamba coffee from the Terimbere Cooperative in Kirundo. Burundi has faced great challenges since its independence from Belgium in 1962, and coffee is the number one export crop for national revenue. The country continues to struggle in the wake of civil war and ongoing political corruption.

In February 2016, Ciza introduced her proposal for a mushroom farming project to support the 400 member Terimbere Cooperative in the coffee off-season. Coffee is harvested in Burundi from March through June, and the volume of specialty coffee produced does not fully sustain the cooperative from year to year. Mushrooms have a four week harvest cycle, and can be grown year round thanks to Burundi’s moderate climate. The immediate benefit of the project will be the production of extra food, and the resultant ability to generate household income. The mushroom byproducts will also be used as compost for coffee fertilizer.

Inspired by the potential of the project, Café Grumpy launched a campaign in April to assist with fundraising for production supplies. A direct donation of $1 from every retail bag of Shamba beans and .25 from every pour-over cup of Shamba sold will be combined with additional online fundraising through gofundme.com/shamba. To date, Café Grumpy has raised about $8k of their proposed $15k support. They will finish the promotion on the current crop inventory at the end of September.

Café Grumpy coffee buyer Cheryl Kingan has been working directly with Angèle Ciza to promote the campaign since February. Kingan visited Burundi in June to meet with project manager Jean Bosco Rugayabatinya and 200 representatives from the Terimbere cooperative. Rugayabatinya attended a local agronomic university in Burundi, and is an expert in the field of mushroom cultivation. His lab in Bujumbura will be used for seed cultivation until the cooperative has their own equipment set up for use in Kirundo, the farming area. Kirundo is about two and half hours north of the capital, and borders Rwanda.

After the meeting, Rugayabatinya and Ciza finalized logistics for the the training campaign. 65 men and 65 women will be trained over a four month period. The first training session took place in late July, and the initial mushroom production will take place this week. The program includes growing theory and practice, incubation, fructation, and four initial harvests. Mushroom varieties, farming techniques, processing and conservation are also part of the training.

Café Grumpy has already contracted a larger purchase of Shamba coffee for the 2016-17 harvest, and will continue to discuss any additional support necessary to sustain the project development with Ciza.